U.S. soybeans, such as those processed into soy flour at the new Tiger Soy plant, are transported on ships, trains, trucks and more to reach some of the world’s most challenging environments. Upon arrival in at least 88 countries throughout the world, international organizations are working to tap the power of soy protein as a vital source of nutrition in their global food security programs.

“We absolutely would not have made the investment in this new plant without P.L. 480,” says Tiger Soy Commercial Director Adam Thomas of the historic program launched by President Eisenhower to distribute U.S. agricultural commodities in Europe during WWII reconstruction.

Tiger Soy’s Thomas stresses that the Food for Peace Act, commonly called P.L. (Public Law) 480, provided the important base for the investment decision for the plant as well as its ongoing business model. At the same time, they are working hard to grow their business, including by joining discussions with ASA’s World Initiative for Soy in Human Health (WISHH) Program that connects trade and development across global market systems, improving food security in Africa, Asia and Latin America.

Tiger Soy opened in 2020 in Mexico, Missouri after a multi-million private investment to retrofit the Missouri Plant Sciences Center. They produce soy flour and other soy products, including for Tiger Soy’s sister company, SEMO Milling. Located in Cape Girardeau, Mo., SEMO Milling is a food-grade corn milling plant that needed more soy flour for its business that includes selling corn-soy-blend-plus, often called Super Cereal, to the United Nation’s World Food Program (WFP) and other international organizations. Tiger Soy makes the soy flour that it then has trucked to SEMO Milling for blending with corn products.

Because they manufacture ready-to-eat foods that are often destined for extreme climates and remote locations, both Tiger Soy and SEMO Milling must meet high food safety and packaging requirements. Box cars containing 3600 55-lb. bags of their products leave SEMO in the Missouri Bootheel destined for vessels at the Port of Houston and other locations. In a few weeks, they reach the field operations of organizations, such as the United Nations World Food Program (WFP).

“Soybean producers have a long history of producing vegetable oil and protein products to feed the world,” says World Food Program USA Chief Advocacy and Engagement Officer Rebecca Middleton. “Soy protein along with other U.S. commodities are a vital component of efforts.”

Commodities are one of the tools that WFP uses to work closely with governments and other local, national and international partners to develop holistic strategies and solutions in 88 countries and reach more than 100 million people every year. Due to the impact of COVID-19, drought, conflict and more, WFP is experiencing heightened need for commodities in countries where markets are not functioning.

The soy story at Edesia

Edesia produces up to 1.5 million packets of soy-containing foods per day at their technologically sophisticated factory located in Rhode Island that ships its products abroad through ports, such as Port Elizabeth in New Jersey. Their 110 employees run a 24-hours-a-day plant that uses soy flour and soybean oil to manufacture ready-to-use supplementary foods (RUSFs) and ready-to-use therapeutic foods (RUTFs).

In total, Edesia’s products are consumed in 60 countries. Edesia’s leading customers are the U.S. Agency for International Development (USAID), USDA, UNICEF, WFP and other organizations that purchase their products. These organizations transport Edesia’s products to some of the world’s most challenging places and remote locations. As a federal contractor selling into USAID’s Title II P.L. 480 program, they must source U.S. commodities.

Edesia’s mission includes education for food security and global nutrition, so their factory is also specially designed to allow tours without disrupting their production. They also have a mock clinic on site to demonstrate their products’ use in the field. At least 25 of their employees formerly lived in refugee camps themselves. Some for more than 20 years where they personally experienced reliance on foods such as corn-soy blend, Super Cereal and ready-to-use foods, such as the ones Edesia makes.

Edesia is part of a network called Plumpyfield, which includes many similar operations in developing countries, such as Ethiopia, Niger, India and Haiti. Edesia and other international organizations see a need for local production of these products in Africa and other countries, which would reduce transportation costs and improve supply chains. 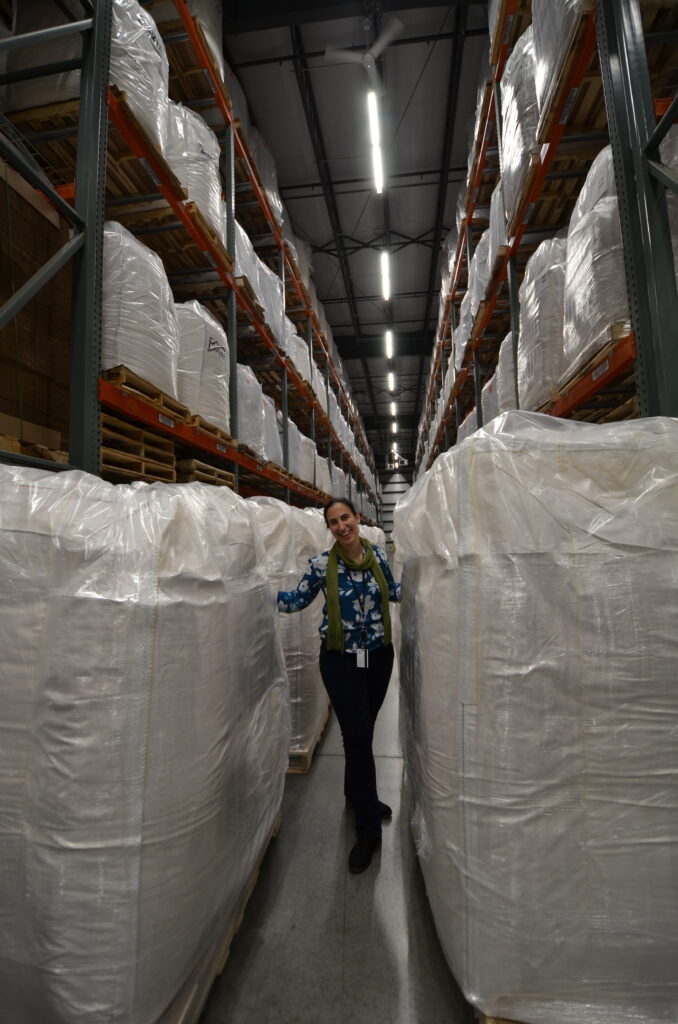 Edesia Executive Director Maria Kasparian with purchases of U.S. soy flour that Edesia will use to produce up to 1.5 million packets of soy-containing foods per-day at their technologically sophisticated factory in Rhode Island. Edesia ships its ready-to-eat foods for consumption in 60 countries.

The genesis of these products goes back to the late 1990s, when Doctors Without Borders and similar groups witnessed that families in developing countries waited too long to bring malnourished children for treatment. Hospitalization required leaving the farms and siblings behind to go stay with a malnourished child in hospitals that are often miles away. In the early and mid-2000s, these groups evaluated the theory that if they could get high-quality nutrient-dense foods to the local communities then the families could feed the foods to the children at home, preventing the need to travel for hospitalization.

By 2007, the theory of improving care with home-based ready-to-use foods proved correct. Since then, a growing number of organizations, such as International Medical Corps and Save the Children, depend on products, such as Edesia’s, to empower families to meet the nutritional needs of their children. As a result, fewer children need hospitalization and survival rates have increased.