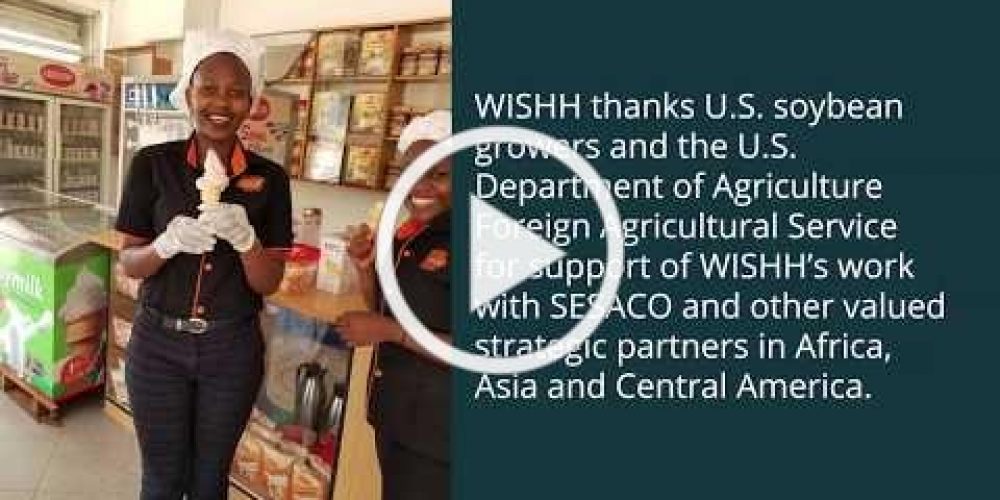 What better way to celebrate April as Soyfoods month than to salute the inspirational SESACO foods and beverages company in Uganda. SESACO brings the nutritional power of soy protein to breads, beverages, school meals and more. This month, the continuously innovating ASA/WISHH strategic partner introduced frozen soy dessert, a first for Uganda and quite possibly the entire East African region.

Partnerships, trade and jobs for women are three key ingredients in SESACO founder Charles Nsubuga’s recipe for economic growth and improved nutrition for the region. The family owned company employs approximately 100 women to manufacture its unique products, such as the coffee-inspired Soyacup beverage, soy millet porridges, and soy yoghurt, as well as operate a retail store and conduct street kitchen promotions. SESACO also supplies Ugandan bakers with U.S. soy flour and trains them on how it can boost their profits–and at the same time–increase the nutrition and shelf life of their breads.

Even more women benefit from SESACO’s partnership with a development organization. Together with nutritionists, they created low-cost soy flour-based porridges that Ugandan women market in small packets for their local communities.

SESACO’s entrepreneurial journey began in 1978 when Charles started selling peanuts to coworkers. Sales increased and this cottage business grew steadily — all signs pointing up until his country’s conflict with Tanzania. An eight-year stall did not dim his dreams. In 1987, Charles launched Serve to Save Co. as a bakery with two employees.

The company expanded to purchase soy from African farmers and has participated in programs to help link the region’s smallholder farmers to its supply chain. Business growth and the need for high-quality soy protein products, like defatted soy flour and textured vegetable protein, opened the door for trade. “We can’t produce these products at home so we better import them from the USA so we can address two main challenges: one nutrition and the other economic,” Charles says.

In 2011, Charles signed a memorandum of understanding with WISHH, allowing SESACO to receive a container of U.S. soy through the U.S. Department of Agriculture’s (USDA) Quality Samples Program. The nearly 10,000 pounds of soy were instrumental in SESACO’s efforts to introduce U.S. soy’s benefits to African markets. That same year, SESACO captured national media coverage in Uganda when it introduced the first soy milk in the East African country.

WISHH’s ongoing cooperation with SESACO has leveraged additional USDA Foreign Agricultural Service programs, such as the Foreign Market Development Program, along with funding from Qualified State Soybean Boards. Leveraged resources have allowed Charles and his customers to come to the United States for training, such as the Northern Crops Institute’s courses on incorporating soy into bakery foods.

Thanks to USDA’s Cochran Fellowship Program, WISHH was able to bring Charles to the United States in 2018 to participate in school meals training, including WISHH’s Affordable Protein Supply: Solving the Institutional Meals Puzzle workshop at Purdue University. The Cochran Fellowship assisted Charles and SESACO’s collaborators with insight for sustained school feeding on a larger scale. Private schools are already purchasing SESACO’s products made with U.S. textured vegetable soy protein. Charles aspires for his country to launch a national school meal program where more children will be able to benefit from nutritious and cost-effective soy protein.

WISHH also aided Charles in connecting with U.S. suppliers, resulting in SESACO’s 2018 agreement to buy soy flour from ZFS Creston. Additionally, SESACO purchased textured soy protein from Kansas Protein Foods. When the products arrived in Uganda, SESACO’s prior U.S.-based training enabled them to offer their own 2019 training to Ugandan bakers who are new to the benefits and use of U.S. soy.

The company’s growth received an extra boost in 2018. The Yield Uganda Investment Fund, set up with financing from the European Union and National Social Security Fund Uganda (NSSF) and managed by Pearl Capital Partners (PCP), made SESACO its maiden investment in Uganda.

SESACO’s enterprise-driven attitude makes the company a valued WISHH strategic partner to meet the world’s growing protein needs. “The collaboration is promoting trade between us,” Charles says. “The neighboring countries are picking up the idea because of what is existing between us and ASA/WISHH. The economic impact is such a big one that could not have taken place without this kind of partnership.”

American Soybean Association President Brad Doyle has confirmed the election of ASA’s World Initiative for Soy in Human Health Program officers and committee members for the upcoming year. Officers are Roberta Simpson-Dolbeare (ASA-IL) who will serve as Chair, Morey Hill

By: Mark Messina, PhD, Soy Nutrition Institute (SNI) Global • May 17, 2022 As the global population continues to increase, world leaders and scientific researchers alongside U.S. farmers strive to identify ways to feed our growing populace. In a new

By: Linda Funk, Flavorful Insight •Apr 11, 2022 In the United States, April is National Soyfoods Month—an ideal time to share news about the advantages that versatile soyfoods made with U.S.-grown soy offer to global consumers. Soyfoods have what it takes