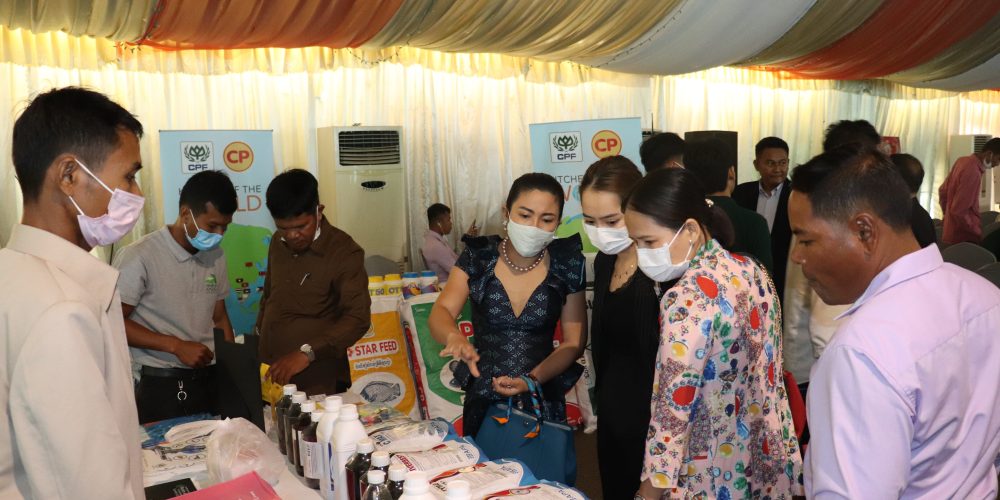 The Cambodian Aquaculturalist Association (CAA), with support from ASA/WISHH’s Commercialization of Aquaculture for Sustainability Trade (CAST) – Cambodia project, succeeded in assembling 130 members of the aquaculture industry for the association’s first annual meeting on Sept. 22 in Phnom Penh.

His Excellency Veng Sakhon, Minister of Agriculture, Forestry and Fisheries (MAFF), presided over the meeting. He congratulated CAA, stressing its importance to the Ministry’s initiatives to grow the quantity and quality of Cambodia’s aquaculture industry’s production. Moreover, the government has released $500,000 in loans this year to aquaculture enterprises, and CAA is working closely with MAFF to support this important initiative. According to the minister, Cambodia currently has 46,000 aquaculturalists, as well as 895 community ponds and 309 fish hatcheries.

In conjunction with the meeting, CAA members also showcased their products, creating new linkages between buyers and sellers. “The event raised awareness of how important the aquaculture industry is and showed unity that it is recognized and supported,” says CAA board member, Mrs. Reth Chanthavy, from Apsara Agri Supplies, an ADM customer and a distributor of fish feeds made with U.S. soy. “Aquaculture farmers are not alone anymore.”

On Sept. 23 at the Royal University of Agriculture (RUA) in Phnom Penh, CAA and CAST conducted technical training for aquaculture value chain members to gain new information and expertise on feed, feeding, and marketing of fingerlings. CAST partnered with the Center​ of Excellence​​ on Sustainable Agricultural Intensification and Nutrition (CE SAIN) at RUA to host the training where aquaculture value chain members, including fish farmers, hatchery managers and feed distributors, attained new information and expertise.

American Soybean Association President Brad Doyle has confirmed the election of ASA’s World Initiative for Soy in Human Health Program officers and committee members for the upcoming year. Officers are Roberta Simpson-Dolbeare (ASA-IL) who will serve as Chair, Morey Hill

By: Mark Messina, PhD, Soy Nutrition Institute (SNI) Global • May 17, 2022 As the global population continues to increase, world leaders and scientific researchers alongside U.S. farmers strive to identify ways to feed our growing populace. In a new

By: Linda Funk, Flavorful Insight •Apr 11, 2022 In the United States, April is National Soyfoods Month—an ideal time to share news about the advantages that versatile soyfoods made with U.S.-grown soy offer to global consumers. Soyfoods have what it takes